With all of the recent talk of the United States normalizing relations with Cuba, my memory takes me back to several deliveries when I had stopped in Cuba while en route to Latin America. I have always found the officials and people of Cuba warm and inviting. But what I remember most about my stops in Cuba is the food. Luckily, living in South Florida affords me the opportunity to revisit this style of cooking. Here is one of my favorite dishes. 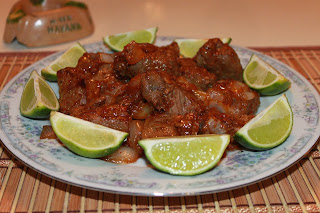 Preparation:
Cut pork into 2 inch chunks. Place chunks into a bowl and add 2 cups Cuban mojo marinade. Store bought is fine or use my recipe below. Cover bowl and refrigerate overnight.

In a skillet add water, lard, salt and pork chunks. Over medium high heat, bring to boil. Reduce heat to medium low heat and cook about 40 minutes. The water will evaporate leaving only the lard and pork chunks. Once the water has evaporated, bring the heat up to medium high and sauté onions until translucent; about two minutes. Serve as a main dish with rice, black beans and fried plantains.

It is important to cook this with lard, which is rendered from pork and thus enhances the flavor of the Masitas. Enjoy, JW