I think October is my favorite month of the year. It is my birth month. Fittingly, the birth stone of October is the opal coming from the ancient Greek word opallios, which meant “to see a change in color.” Coming off the sweltering heat of August/September, there is a definite change in the air.


The most famous icon of October (besides the start of holiday shopping for Christmas) is the
jack-o-lantern. Various sources attribute it to either Scottish or Irish origin. It seems that the lantern was used by people who traveled the roads at night, the grotesque face to scare away faeries and spirits. And who, as a child, hasn’t bobbed for apples? Is it possibly a Pagan baptism? With hands tied behind the back and blindfolded with head immersed in water, can one see its’ origins as a Craft initiation?


Also, October signals the return of the venerable snowbird. Every year, thousands of Canadians take the migratory route to South Florida for 6 months of escape from their northern winter climes. One of the yachts that I run occasionally is Canadian owned.  I always prepare something familiar to them, like Bacon Butter Rum Tarts (The Triton 3/2018). The recipe below is my variation of a Canadian comfort food, poutine. Simple store bought items makes for quick and easy food for game night. 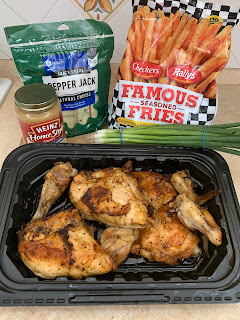 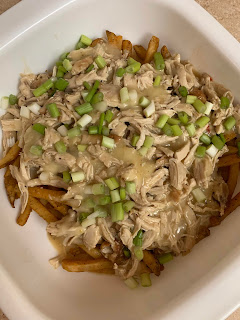 
Pre-heat the oven to 450°F. Bake fries as per package instructions on parchment. While fries are baking, shred, by hand 2 cups of the chicken.  Preheat a large sauté pan over medium heat, pour in gravy and chicken, cooking for 3-4 minutes stirring occasionally until it starts to bubble. Lower the heat to simmer. Once fries are finished baking, divide the fries between serving plates. Add the cheese to warm gravy last, simmering 2-3 minutes. Serve gravy over the fries and sprinkle green onion as a garnish. Savourer faire!! JW
Posted by Capt. John Wampler at 6:46 PM No comments:

Mexico is one of my favorite countries to cruise thru. There is a difference between the Caribbean and Pacific sides of the country. The music, the proud indigenous people and the food have distinct differences. I prefer the Pacific over the Caribbean when it comes to food, though the Yucatecan/Mayan cuisine holds its’ own mystique.

No matter which coast, one of my favorite comfort foods is Tacos al Pastor. On most street corners you will find a taco shop with a vertical spit (think gyro) called a trompo, with slices of marinated pork piled high on top of each other. The meat is spun around and cooked in front of an open flame until cooked thru. At the top of the spit there is usually peeled pineapple cooking. The “taquero” slices the cooked pork onto a corn tortilla followed by a piece of the pineapple, finely chopped onion and cilantro. Serve with salsa rojo (red) or verde (green). 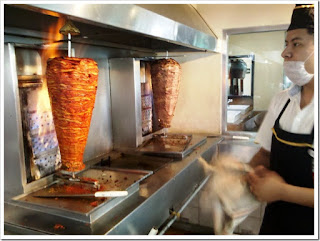 Not owning a trompo myself, I have a simple recipe that mimics this tasty taco. 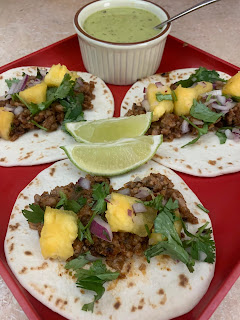 PREPARATION:
Cut 6 oz. of the pineapple into ¼ inch pieces and coarsely chop the remaining pineapple. Chop finely the onion and mince a ¼ c. of cilantro. To make the salsa, in a bowl, mix the small pineapple pieces, half of the chopped onion and cilantro.


In a food processor, puree the canned tomato with chili and large pineapple chunks until smooth; like a pesto. In a skillet, over medium heat, cook the ground pork and remaining onion until pork is no longer pink. Stir in the tomato mix and simmer until thickened. Pepper and salt to taste. Serve on warm taco shells or tortillas and garnish with pineapple chunks, lime wedge and cilantro. Enjoy, JW

Posted by Capt. John Wampler at 9:24 AM No comments: