I grew up in the foothills of Southern California in the 1960s. Coming off the post-war 1950’s, it seemed like California was always on the cutting edge of music, technologies, fast cars and fast food. Taking over from the casual dining experience of Howard Johnson, Sambo’s, Shakey’s Pizza and  Bob’s Big Boy, America embraced the fast food convenience of McDonald’s (“tens of thousands sold) , In-N-Out,  Jack in the Box, A&W, Colonial Sanders and Taco Bell. In 1968, I could leave junior high school during lunch break on my bike, go to a fast food restaurant and get a cheese burger for .25 fries for a nickel and a large soft drink for .20 cents!


One of my favorites was what Taco Bell called the “Bell Burger.” It was a Sloppy Joe style sandwich using your season beef and cheddar cheese used in their tacos; add lettuce tomatoes and onion for the “Bell Grande.” During special promotions, I could get 5 for a dollar! Sadly, the Bell Burger was a casualty of the Burger War and was extinct by the mid-1970s. I do not profess to have their secret recipe, but this is pretty darn close. It is a simple and quick recipe if condiments are prepped in advance. The picante sauce is fresh and without preservatives. This would be a great item for game night. 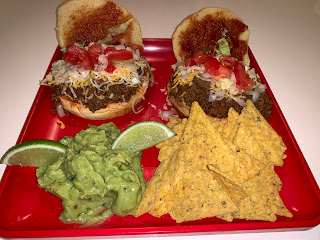 
It is best to make the sauce first.  In a saucepan add the water and cornstarch and whisk until fully dissolved. Next add vinegar, salt, cayenne and tomato paste. While bringing it to a boil, continue stirring sauce. Reduce heat to low and let simmer until sauce thickens. Cool sauce in a covered container in the refrigerator.
Now for the filling: In a stand mixer or food processor, combine the ground beef and dry ingredients until well mixed. In a large skillet over medium heat, add beef and the ½ cup water. Stir the mixture while it cooks, breaking up large chunks. Cook until slightly browned. In a colander, drain off any grease or liquid. While cooking the beef mixture, steam the buns slightly in a rice maker or double boiler.

Posted by Capt. John Wampler at 1:24 PM No comments:

I’ve never seen a buffalo fly, but Buffalo Style Wings have been made their mark as a favorite appetizer and party fare. It wasn’t long ago that wings were just scraps relegated to the stockpot for making broth or soup. With the commercialization of chicken harvesting, consumers opted for the better portions of chicken, the breasts, thighs and leg portions, the wings ended up going to soup factories.

There is much debate about who actually came up with the recipe for hot chicken wings, but the consensus points to the Anchor Bar in Buffalo, New York. The story goes that back in 1964, the owner of the bar had to feed a group of her son’s friends and with a bunch of wings on hand, deep fried them and then tossed them in a buttery chili sauce and served them with bleu cheese dip and celery. The wings were a hit!! The City of Buffalo has designated July 29th Chicken Wing Day. And as a matter of record, the Anchor Bar serves 70 thousand pounds of chicken monthly! 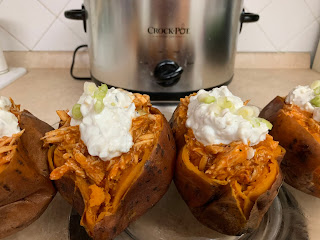 This recipe combines the sweetness of the yam with the spiciness of the chicken and then finished with the coolness of the yogurt-bleu cheese topping.


Coat a slow cooker with nonstick spray and place the chicken in the bottom of the cooker.


In a separate bowl, add the hot sauce, garlic powder, cayenne, salt, pepper and coconut oil and microwave for 45 seconds and then stir. Pour the sauce over the chicken breasts and cover the slow cooker. Then cook for 1½ hours on high until chicken is fully cooked. While the chicken is in the crockpot, prepare the sweet potatoes. Coat with butter, wrap in foil and bake in the oven at 400° for 45 minutes.


Leaving the sauce in the crockpot, remove chicken from slow cooker and shred with a fork on a separate plate. In a separate bowl, mix the cornstarch with the water and pour back into the slow cooker with remaining hot sauce. Combine using a whisk. Cook sauce on high for 30 minutes.


Add shredded chicken back into the slow cooker and toss it well into the sauce so that it is entirely coated.

Once everything is prepared, split the sweet potatoes and mash with skin on. Spoon on the chicken,  yogurt-bleu cheese and garnish with chopped, green onions. Enjoy, JW

Posted by Capt. John Wampler at 1:15 PM No comments: