It’s unclear exactly when cacao came on the scene or who invented it. According to Hayes Lavis, cultural arts curator for the Smithsonian’s National Museum of the American Indian, ancient Olmec pots and vessels from around 1500 B.C. were discovered in Southern Mexico with traces of theobromine, a stimulant compound found in chocolate and tea.

Chocolate has heart healthy properties and it has been stated that it is also an aphrodisiac. When it comes to great discoveries, in my book, chocolate ranks high on my list. 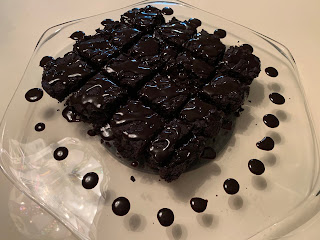 Next, pour batter into a 9x9” tin foil covered baking pan. Bake in oven for 25 minutes, or until an inserted toothpick comes out clean. While the brownies are baking, for the glaze melt the butter and semi-sweet chocolate until smooth. Then, whisk in the wine and set aside.

After removing brownies from the over, let them cool. Next, drizzle the glaze over the brownies and spread the topping using a rubber spatula. Enjoy, JW